While this may not be the case for everyone, the word “retro” only makes me think of arcades and the ’80s and ’90s. I may be too young to have experienced anything considered retro today, but that does not mean it has always intrigued me. Growing up with all of the video games in the 2000s and a Dad who deems Pac-man the only true video game had created an early question for me, which was, “what is so great about Pac-man?” I have obviously played Pac-man, but the chance to go back and play other games from the same era and make it a part of school work is one I could not turn down. The purpose of this project is to understand how to load a premade imager and code onto the Raspberry Pi’s micro SD card externally so I can play those old arcade games provided.

Thankfully, what was required to complete this project was not a long list, as I ran into issues quite quickly. As there was no micro SD card reader to be found in the house, that was the first and only item I had to purchase. 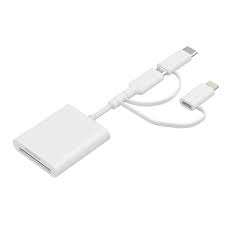 I opted for the Vivitar “universal reader” as I was in a rush and assumed the list “PC, Mobile, Mac” was reliable. Of course, none of the adapters actually worked with the family mac book so after attempting to complete the project with my phone to no avail, I had to ask my uncle for his laptop, and then the external reader worked just fine. The only other physical requirements were some form of controller, I used a PlayStation4 controller, an HDMI cable, a monitor, and lastly a power source for the Pi.

As I had mentioned previously, I first attempted to do this project with an Apple product, so the first video I referred to was based around using a Mac to complete it, and this is the link to it. https://youtu.be/RQYuMNUUeBQ . The video that actually helped me complete the project was, https://youtu.be/f0ZFr5EaZsE . This video essentially gave a much easier-to-follow guide than the rather outdated video provided on the RetroPie website. The only section I really needed from the RetroPie website was the Download page, https://retropie.org.uk/download/ . Now, the first thing that The Geek Pub video had me do was download the SD card formatter, https://www.sdcard.org/downloads/formatter/ , as the SD card would need to be formatted, essentially wiped, to finish this project. Now that the SD card is ready, I had to download an application called belenaEtcher, https://www.balena.io/etcher/ , which just made moving the downloaded files from the laptop to the SD card much easier.

After removing the SD card from the external reader and placing it back in the Raspberry Pi, all I had to do was plug in the power supply, the HDMI cable that was already connected to a monitor, and then my PS4 controller.

Although I did not show any video of me playing the games, I can assure you that any of the struggle and troubleshooting while doing the project was completely forgotten when actually playing the games. I loved the simplicity of this project and honestly how all of the code is ready for download on the RetroPie website, as I am not very savy when it comes to the language of computers. I would definitely recommend not doing this project while on a family vacation in a different state. If I was smarter, I would definitely have finished this project at home where resources are more readily available. However, being able to show the family the end product was a benefit, so maybe I’ll leave that decision up to you. Overall, the project was more satisfying to finish and complete than any of the issues so it was well worth the time and effort. I wanted to use the Raspberry Pi3 to make a system that would detect a face or body when someone entered the view of a camera. Unfortunately, when beginning my project I realized that my Read more…

The Raspberry Pi is very capable of many different things, though not the most powerful pc overall its highly capable for its size. I have enjoyed using the Pi and could see myself getting my Read more…